The History of British Bars

LED ice bucket supplier introduces the history of the bar.

The British refer to the bar as a pub, short for public house. As a community culture, the bar has a long history, and it is inextricably linked to the history, social life, and natural customs of the United Kingdom. The past is quite different. It is large in scale and well-decorated, but almost all the bars are decorated in antique style and still retain the simple and pure style, giving guests a feeling of being at home. Many country bars have hundreds of years of history, only From the hotel ’s signboard, you can guess its history and the story behind it. The British pub has developed from the “almshouse” that emerged in the early eleventh century to today ’s “popular home”. The ups and downs of the period played different social roles and made an indelible contribution to the development of British social politics, economy, and culture.

In the early eleventh century, after "Conqueror William" took control of England, the British economy entered an era of "expansion without development". The long-term struggle for power has slowed the development of the British economy, and the economic situation is very backward. At that time, 95% of the English people lived in the countryside and depended on farming for their livelihood.

The implementation of feudal serfdom led many farmers to be regarded as serfs, and they were confined to the manor where they were born and were deeply exploited and oppressed by the lord. Most people barely maintain their livelihoods by renting farming fields, and there is simply no hope of enjoying the mountains and water. Coupled with the fact that England is sparsely populated and the transportation is underdeveloped, it is really inconvenient to move around. The only motivation for people to leave home is to worship at the sacred church, hoping to get spiritual comfort and physical pain relief. The famous religious holy places at that time were Glastonbury, Canterbury, and Chichester. Pilgrims did not fear hardships and traveled thousands of miles to pray here. Motivated by their sincerity, many monks of the monastery set up "almshouses" next to the monastery, warmly received pilgrims in need, and provided them with accommodation. At that time, because of the poor conditions, all the guests shared a room and shared a table, sleeping on the grass. With the gradual improvement of conditions, wealthy guests can enjoy separate rooms. During the Reformation, many monasteries were disbanded, but some workhouses survived because of their reputation. In Glastonbury, southern England, people can still see the "George and Pilgrim" hotel.

The origin of another type of tavern is related to the church. After William became king in England, Latin culture also followed, especially as a large number of Nuoyandi priests came to England, some major changes have taken place in the churches and abbeys of England. They raised the cultural level of churches and monasteries and built many churches and monasteries in villages and towns. Due to the needs of construction, the local priest set up temporary accommodation for construction workers next to the church. After the construction of the church was completed, the houses were handed over to the priests. So, they began to accept some hikers. Of course, this also brings them extra income. The third type of early hotel was a housekeeper-run inn built by a medieval manor, or an old house left after the family moved. The family surnames or badges still remain on the doors of such pubs.

The rise of roadside taverns is inseparable from the development of British road traffic. With the slow development of the social economy, the population of the United Kingdom has gradually increased, and domestic and foreign commercial activities have also developed. Correspondingly, the traffic situation in Britain has also improved. In particular, the British Revolution has promoted the rapid development of transportation. During the war, due to military needs, the Parliament had ordered the summoning of migrant workers to build roads. The surge in the mail during the war forced the carriage of mail to run regularly. After the war, there were a small number of carriages running on the main road from Winchester, York, and Mucastle to London. However, due to poor road conditions, poor vehicle elasticity, and long travel time, traveling by car often brings physical pain to travelers and is also a physical test. In order to reduce the fatigue of travelers, roadside taverns came into being. In the eighteenth century, traffic conditions improved, and roadside taverns were built to their heyday. Some large taverns also appeared one after another. Indoor conditions have been greatly improved and passengers can get better service. In the era when the horse-drawn carriage was the main means of transportation, due to the limited energy of the horses, it was necessary to take a rest on the way to supplement the feeding, and the roadside inn provided the best place. These taverns expanded the stables in the backyard and prepared feed; in the front lobby, the tavern owners prepared wine and food for the guests, warmly welcomed each visitor, and provided them with dedicated service. For those who need to stay overnight, the pub also has a room where guests can live comfortably. Last night. In 1784, when the post car was introduced, some roadside taverns became the place where coaches exchanged horses and riders. The owners of these taverns also act as local postmen. They help to distribute and collect mail. People still can see the mailbox used in the "George Dragon Tavern" of Huston Bernt Tren.

Although roadside taverns are developing rapidly, they are only a short-lived phenomenon in the history of Britain because they are not compatible with rapid economic development. With the arrival of the Industrial Revolution and the construction of the railway, many taverns disappeared. The few surviving taverns can only serve the local train station. It wasn't until later that the automobile industry developed, and some roadside taverns only showed birth again.

The island nation of Great Britain is surrounded by the sea, and its coast is rugged. The special geographical environment has formed many harbors. This is the main reason why the British maritime industry is developed and the world trade started early. The geographical and climatic characteristics of the United Kingdom have also formed numerous rivers. In this small territory, the rivers are densely distributed, which is of great significance to the lives, transportation, and agriculture of the British. With the increasing frequency of maritime business activities and the rapid development of inland water transportation, some taverns have appeared on the harbor and waterfront. Businessmen and people crossing the river can rest here and wait. Usually, the boatman prepares some beer for the people waiting for the boat in his hut to pass the time; at the same time, he also hopes that the guests who come and go can bring them back some news. This is the prototype of the waterside tavern.

In the eighteenth century, in order to meet the needs of industrial development and provide convenient conditions for the transportation of goods, Britain dug many canals. Like the roadside tavern, the canalside tavern became a place for water trade, and also collected and distributed mail for ships. Most of the bars named after "Boat", "Ship", "Navigation '" and "Barge" are products of that era. When rail transport replaced water transport, these waterside taverns were abandoned. In recent years, the entertainment industry has developed, and people take advantage of weekends and holidays to play on the water and return to nature. Many rivers blocked by silt were cleared, water sports were active, and the old taverns were full of vitality. Tourists are tired of playing, you can sit in the bar overlooking the beautiful scenery of the water through the window, or sit on the platform outside the tavern, enjoy the sun, drink and chat while admiring the surrounding green trees and blue water. Located on the banks of the Thames, surrounded by lush "trout", has been a popular place for Oxford students for hundreds of years and a place where talents gather. Even some pub owners are ingenious, setting the table on a boat moored by the water, sitting on the boat, drinking and talking.

Our company provides high-quality champagne ice buckets and LED champagne cabinets. If you are interested in our products, please contact us randomly. 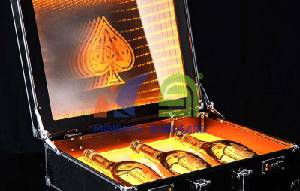 Previous: Bar Wine Cabinet
Next: The Origin of Bar and the Birth of Bar Culture
Navigation
Contact Us
Follow Us