The origin of the National Day

On October 1, 1949, the founding ceremony was held in Tian’anmen Square, Beijing.

In the rumbling salute, the People’s Republic of China was declared to be established.

After more than one hundred years of heroic struggle, the Chinese people have won the great victory of the people's revolution under the leadership of the Communist Party of China.

On October 1, 1949, China was established, which is one of the greatest changes in Chinese history.

At the first meeting of the CPPCC in September 1949, it was decided to set October 1 as National Day.

The flag of the People’s Republic of China is red in symbol of the revolution.

The five five-pointed stars on the flag and their relationship symbolize the great unity of the revolutionary people under the leadership of the Communist Party.

The yellow color of the star is to show the light on the red earth. Each of the four small five-pointed stars has a corner facing the center of the big star, indicating unity around a center.

On June 28, 1990, the Fourth National People's Congress Standing Committee adopted the "Flag of the People's Republic of China" Law at its fourteenth meeting. The law will come into force on October 1 of the same year. 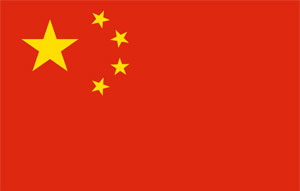 On September 27, 1949, on the eve of the founding of the People's Republic of China, the resolution of the first plenary session of the Chinese People's Political Consultative Conference: Before the national anthem was officially formulated, the "Music of the Volunteers" composed by Tian Han and Nie Er was used as the national anthem.

In 1978, after the first meeting of the Fifth National People's Congress, the "March of the Volunteers" was officially designated as the national anthem of the People's Republic of China.

Here all the staff of MINGXIN BARWARE sincerely wish our motherland prosperity and happiness on the 70th anniversary of National Day.

Previous: How to Choose a Suitable Store Location for a Bar?
Next: Correct posture of bar management staff tray
Navigation
Contact Us
Follow Us